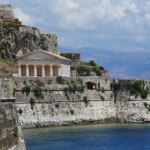 Whilst some areas of Corfu have been developed for mass tourism since the 1960’s, much of the island remains untouched, boasting uninhabited olive groves, picturesque mountain and woodland landscapes, as well as some of the best beaches in the Ionian. Named in works by Shakespeare and Milton, as well as more recent writers such as Gerald and Lawrence Durrell, it has inspired many pieces of wonderful literature. The second largest, northernmost and greenest of the Ionian Islands, Corfu has a population of approximately 115.000 people, of which 40.000 live in the town of Corfu, the island’s elegant capital. Situated superbly on the east coast promontory of the island and flanked by the new and old fortresses; French, British, but particularly Venetian influences are apparent throughout the town. Legacies of these administrations can be seen in the “Liston”, modeled after Paris’ Rue de Rivoli the “Spianada” (Esplanade) where the green is home to Greece’s only cricket ground and generally throughout the town the pale pastels of shuttered dwellings in the narrow 18th century streets, have been compared more with Venice or Naples rather than any other Greek town. The island covers an area of 592 sq meters, with gentle, rolling hills in the south and rugged limestone mountains to the north, where Mt Pantokrator reaches 906m at its highest peak. The mild climate and heavy rainfall (the highest percentage in Greece) encourages the abundance of wild flowers, cypress trees, herbs and other flora and fauna. Due the rich vegetation and suitable climate the island’s main source of income is agriculture. On the other hand the beautiful scenery attracts many visitors, thus increasing the revenue from its tourism trade. Corfu is widely regarded as the nation’s most beautiful island. 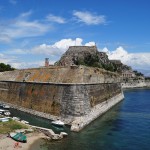 The New Fortress (new because it was built some 30 years after the Old Fortress), dominates the old port and is a marvellous spectacle especially when viewed from the sea. It took the Venetians 13 years to build in the late 1500's, although additional buildings and tunnels were added later by the British. Public entrance is via the steep stone steps that lead up from the far end of the square. There are fine views from the bastions and a cafe, bar and exhibition centre. The Old Fortress is steeped in the history of Corfu, and provides a powerful visual symbol of the town and island of Corfu. The Old Fortress can be approached via a single passageway accessible from the eastern end of the esplanade. 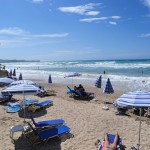 On the north coast of the island of Corfu, Near Kassiopi in an extensive area of lush vegetation and a scenic 40km journey from Corfu airport through mountainous landscape and old quaint Greek villages. Hills rise up from the lush plain of Acharavi and peak at Mount Pantokrater, one of the highest mountains on Corfu. It all makes a pleasing combination of beach, hills and mountains. Acharavi is popular with those seeking a relatively uncomplicated resort where they can take it easy and relax. Acharavi is an attractive resort for families and couples being neither quiet backwater nor overdeveloped. The Roman baths and the more traditional parts of old Acharavi village are on and around the main street parallel to the sea from where narrow lanes make the short distance to the beach. The sand shingle and stone of Acharavi beach stretches several kilometres and quiet relaxed family holidays in Acharavi are assured with its exceptionally gentle shallow waters extending for up to 50 metres providing plenty of safe bathing attractive for children. The beach front has a string of bars and shops. 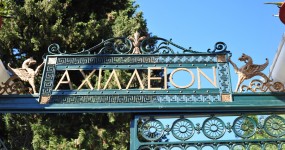 Achilleon Palace This imposing palace, set up high on a hillside south of Corfu Town, was built for the Empress Sissi of Austria. Fascinated with Greek Mythology, she named the Palace after the hero Achilles, and decorated the beautifully landscaped grounds with statues of the Greek heroes and heroines. Built in the early 19th century, the Palace was more recently used under the guise of a casino in the 1977 James Bond film “For Your Eyes Only” (much of which was filmed in Greece) and its grounds make for a pleasant visit, especially on a clear day when the view is breathtaking! 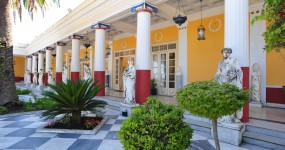 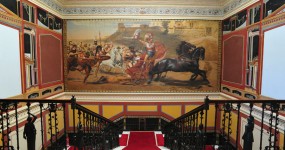 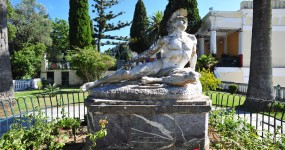